Meaning of the Trending Song Ameno 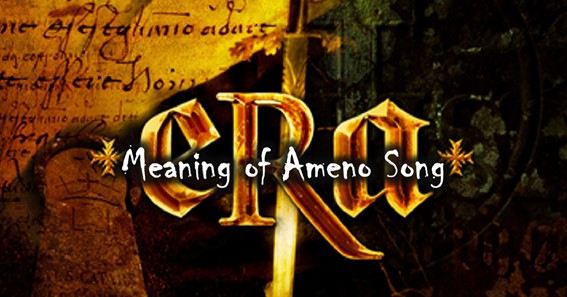 If you are active on social media or if someone in the friends and family circle is, you might have overhead a weird song. It is everywhere and sounds creepy. That is why we are here for the meaning of the trending song Ameno.

It is as strange as it seems when it comes to meaning too. If you are too curious about the strange vibes emanating from this song, you are not alone. Most of the people who hear it for the first time have some mixed feelings about it.

So in this article, we will explore all the relevant information regarding this alien-sounding piece of music. Read the full article and know all that is relevant and important about this track.

What is the Meaning of Ameno Song?

It is so hard to decipher the meaning as it looks like Latin, which it is not. So we have to refer to Ameno lyrics in English to get some idea.

The delivery and performance of the track give out an unusual mixture of complex vibes. Depending upon your perceptional leanings it could appear demonic, spiritual, or even mystical for many. When we look at the videos related to it, they too accentuate these ideas.

Be it the lighting, costume, appearance, or mood of the performers the song took a long time to become a common discussion point after its release.

When we look at the meaning of Ameno’s song, it is hard to come to a definite conclusion about the nature of the soundtrack. Whether it is good or bad, evil or spiritual all depends on the perception of the receiver and his or her senses.

When we strictly follow the lyrics, it appears to be a spiritual hymn. It appears to be a request or a conversational attempt with the spirit world. Which could not be verified independently. Nevertheless, it is a common meditation and relaxation song.

Origin and other details

Known to many as Dorime’s song, it is not the exact title. It is just the chorus from the original which was created by Era. It starts to be the word associated with the track, as it appears to be the most repeated word or for many the most audible and understandable one.

Era is a French New Age music project. As we know new age genre of music is meant to create artistic inspiration, optimism, and relaxation in the listener used in massage, yoga, meditation, or reading as a source of stress management.

The title was released in 1996 as a single in the first album of the project and was given the same name as Era. You might not have heard it before its created a sensation on social media recently, but soon after its release, it was a hit in Latin America, Switzerland, Poland, Belgium, and of course, France.

Ameno Dorime was penned by Eric Lévi, the new-age artist. The words are in pseudo-Latin. This means they may sound to you like Latin but they are not, and are empty of any exact sense or meaning. Guy Protheroe and Harriet Jay performed the vocal for the song.

In addition to writing lyrics, Eric also played Keyboards and arranged the music, while lead guitar, drums, and bass were handled by Philippe Manca. The English Chamber Choir is contributing to the chorus.

The unique composition and lyrics with the pseudo-Latin origin make it a distinctive new-age piece of art that gives a mix of sensations to the listener. For this very reason, some might mistake it for a catholic hymn or even some are calling it an occult chant.

What Is The Meaning Behind Dorime?

People are asking the meaning of Ameno Dorime Song? Here is the meaning of the first and the second line of Dorime Ameno Song in ENGLISH TRANSLATION. “ Disclose. Take me to the inside, absorb, take me

What Does Dorime Mean In Nigeria?

Does Ameno Have Any Meaning?

“Ameno” was written by new-age artist Eric Lévi. The lyrics, by Guy Protheroe, are written in Pseudo-Latin, i.e. sounding like Latin but are in fact deliberately devoid of any exact meaning. The vocals are performed by Guy Protheroe and Harriet Jay.

What Does Oya Na Mean In Nigeria?

Initially, oya na was a phrase popular to the Yoruba’s which means “hurry up” until it began to be used to refer to other things. The difference in its meanings is observed in the cadence while pronouncing. Oya na could mean okay, do whatever you want to do, answer me, let’s go, take care and so many others

No matter what, this piece of music has something in it, that is why it has become an attraction and a trend that is still lingering. What do you think about the meaning of the Ameno song? What kind of feelings does it evoke in you when you listen to it?  Tell us in the comments below and let others know as well.

Previous articleA Comprehensive Comparison of Portfolio Management Services vs Mutual Funds – Which One is Right For You?
Next article5 Things to Keep in Mind Before You Buy a New Home