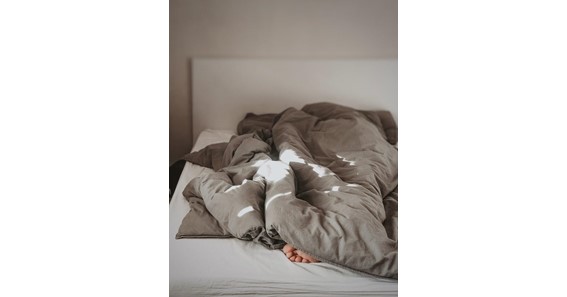 We usually choose a duvet that’s nice and warm, made of material that feels good to the touch, and of course, is big enough. Generally, not too much thought goes into it! However, duvets, like mattresses, can be classified according to many aspects – material, weight, size, anti-allergy treatment, but also by suitability for seasons. There are a plethora of materials in modern duvets and their sophisticated combinations create products with unique properties. We can help you navigate the multitude of products and choose the perfect one for you.

What size duvets are out there – and are they big enough?

It’s nice to sleep under a wide duvet on a double bed – because you don’t wake up. And your partner doesn’t wake up, for example, because they’ve wrapped themselves in a nice large duvet!

A common size for a single duvet is roughly 135×200 centimetres. For some people, even this may not be wide enough. The length of course depends on body height, with taller people opting for a length of 220 centimetres or even longer if the duvet is tailor-made. However, the standard width may also be insufficient for a tall person who is a restless sleeper – they find the cover narrow and often have a cold back, for example.

The solution? Try a double duvet, even if you’re sleeping alone. You won’t spoil anything, on the contrary – you’ll sleep undisturbed. If you’re a couple – a standard double just won’t cut the mustard. Either opt for a queen or king-sized duvet – or, do it European style, and have one large single duvet each! No more fighting for the covers!

Duvets can be just as high-tech as mattresses in their construction! In addition to high quality cotton, fleeces made from hollow fibres of different qualities and abilities are also used to make duvets. These fibres have very good thermal insulation properties and tend to be resistant to bacteria. Some of the materials encountered in mattresses are also found in duvets. For example, Aloe vera – when impregnated into the cover of a duvet, it produces an anti-allergic effect. Aloe vera also has a beneficial effect on the skin. The vast majority of modern duvets are lightweight and highly hygienic, and many are recommended for allergy sufferers. In addition to the composition, the fact that they can be washed at 60°C also helps.

What is the composition of a typical duvet?

The filling is most often made of hollow fibres (polyester) or natural feathers. Often a combination of both materials is also used. For the cover, the choice is most often between soft cotton, satin or microfibre (polyester).

Blankets can be divided into two basic groups:

Even a thin duvet can be very warm

Modern thermal insulation and thermal control materials are better at maintaining body temperature, so thicker layers do not need to be used. In addition to hollow fibres, feathers can still be found in duvets. In addition to pure down blankets, there are also blankets on the market that combine traditional materials (cotton for the cover and down filling) with “space” technology from NASA, who researched into the problem of how to maintain body heat in spacesuits so that the body does not overheat or cool.

Eventually, this research was also used in bedding. The result in modern blankets is the so-called outlast layer, which is a system of miniature pockets that can absorb heat from the body and then distribute it out again (when we start to feel cold in our sleep). This way we don’t sweat or get cold. An example combining cotton, down and modern material is the Temprakon outlayer.

ATTENTION: Blankets containing down should be washed at 30°C.

Want to find everything you need for your home in one place? Overwhelmed by the choice of shops, or want to discover new brands? Introducing FAVI – Europe’s leading product search engine for all things furniture, home décor, and garden. We list products from over 2000 trusted, quality retailers Europe-wide – everything you need, on one website. You can find FAVI in 9 countries – the Czech Republic, Slovakia, Poland, Hungary, the UK, Italy, Sweden, Romania and Croatia. Our mission is to save you time when online shopping so you can create a home you dream of.

To Know Some Great Stuff Do Visit HindiSaath

To Know Some Great Stuff Do Visit HindiVeda

To Know Some Great Stuff Do Visit HowTat

Previous articleDon’t Make These 7 Mistakes When Using Leiebil Services
Next articleDavid Sidoo: How Football Impacted His Life Growing Up