David Sidoo: How Football Impacted His Life Growing Up 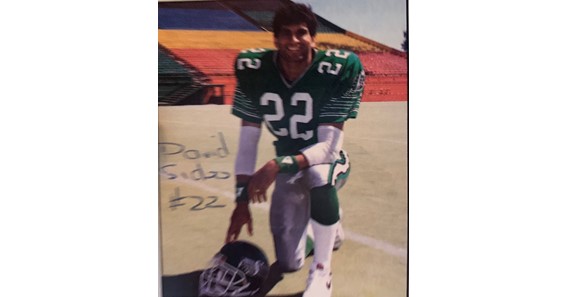 The odds were never in David Sidoo‘s favor for a football career. Seen as too small and not having ever played football, few would have predicted how his career would turn out.

Fast forward to now, and he holds several accolades at all levels of the sport. Not only was he a standout and team captain at the collegiate level, but he made history as the first South Asian professional football player in a six-year CFL (Canadian Football League) career.

Football impacted his life beyond the gridiron, shaping who he is today as a businessman and philanthropist.

David Sidoo doesn’t come from a football background. Born into a traditional Sikh family of immigrants moving to Canada with next to nothing, football was about as foreign as it could be to the entire family.

However, his parents did encourage him to get involved in any activities at school.. That meant getting involved in various activities early on and seeing which ones felt like the best fit. It didn’t take long for David Sidoo to gravitate towards football.

Football tends to weed out the smaller athletes as time goes on. It’s a game of bigger, faster, and stronger athletes once it gets beyond high school. No one ever told that to David Sidoo, who continued to work hard and exceed expectations.

Growing up as the only Sikh family in his neighborhood, life was not always easy for David Sidoo. He constantly faced judgment from others, which can be very challenging for a younger person trying to make their mark on the world.

After breaking down many stereotypes and making a name for himself at the high school football level, college proved to be a lot of the same. He gained success early on as a freshman starting at free safety as a rookie amongst a veteran laiden team that had championship aspirations, at  UBC (University of British Columbia).

Many doubted his ability in football just by how he looked. That always fueled a fire inside Sidoo. But there were times he lacked confidence to believe in himself. Looking back, Sidoo would tell his younger self to be more confident and not get so down on himself.

Despite the negativity, football eventually impacted Sidoo’s  life positively. Once he became accepted by his  teammates, they quickly looked past any differences. The more teammates learned about Sidoo and his character, the more they realized they all  shared the same goals and objectives and it didn’t matter where you were from.

Learning From a Major Setback

There was perhaps no part in Sidoo’s life that was more challenging than the middle of his college career when he received the news that his father passed away due to a heart attack. Hitting a crossroads in his life, he contemplated quitting football and university to support his family. He realized that he needed to help support them. That’s when his coaches and mentors stepped up and helped him.

With no one currently working full time to pay all the bills at home, Sidoo worked two jobs, practiced every day with his teammates, and studied to get a college degree. His college coaches believed in him and told him he had the ability to one day play pro football, and he could not let that dream die.

The way they helped him is a significant reason why he’s so philanthropic to this day. Many of his philanthropic efforts go towards individuals who come from  difficult backgrounds,  and  don’t have the support and funds to see their dreams through.

Moving From Athletics to Business

An education major in college, David Sidoo envisioned himself being a coach later in life. However, as he was starting to think about life after football, he began investing in the stock market. A family member introduced him to the brokerage business, and this is when he began finding his second passion in life.

There are numerous parallels between athletics and business. Much like how he had to work hard to get to the top in football, he was starting out at a bit of a disadvantage in the business world. Not only was he an education major right after college admission, but he was playing football professionally right out of college and had to focus 100% of his time in that profession.

Smart business moves and great networking early in his career opened up more and more opportunities. His passion to be the best, his work ethic, and never quit attitude,  which he learned throughout his life , now seeped into his professional career after football.

Without several people being selfless and helping out a young David Sidoo, there is little chance that he’d be where he is today. From getting involved in football in the first place to potentially having to step away from the game, there was a helping hand every step of the way.

Sidoo never forgot that, and is a major reason why he founded Sidoo Family Giving. As a successful businessman, he was eager to help those less fortunate. He believes many out there deserve the opportunity to reach their goals, and financial limitations should never get in the way.

Whether locally in the greater Vancouver area, or around the globe, Sidoo Family Giving is always linking up with new opportunities to make people’s lives better. For more information on the Sidoo Family Foundation go to their website.

To Know Some Great Stuff Do Visit GetDailyTech

To Know Some Great Stuff Do Visit GrowMeUp

To Know Some Great Stuff Do Visit GuessingTrick

Previous articleLet’s talk duvets!
Next articleTop Reasons Why a Smart Watch for Boys Is the Perfect Gift