Beginner’s Guide to the Zorb Ball 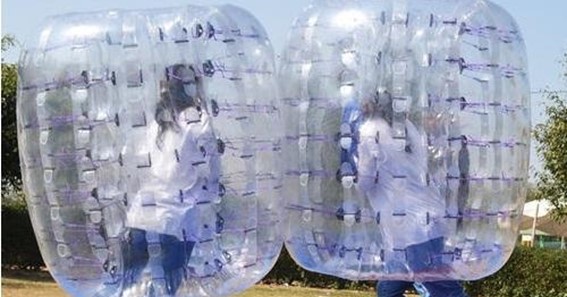 Contents
1 The popularity of Zorb balls is spreading across America
1.1 Design of this ball
1.2 Gaming balls

The popularity of Zorb balls is spreading across America

It’s tough to not have a tonne of fun while zorbing, whether you’re rolling downhill, walking on water, or competing against a friend on an obstacle course.

A human can climb inside a giant, inflated, flexible plastic ball known as a zorb. In essence, it’s an enormous inflatable hamster ball for people, minus the hard shell that the rodent variety has. They can be applied on water, grass, snow, or ice.

People have been quite inventive with the ways they use these balls, and we’re really just starting to realise their full potential for entertaining activities. Some examples include zorb ball soccer, water zorbing, and other water games, zorb sumo wrestling.

Zorbing has been featured on TV shows and in a variety of well-known internet videos, such as this one on youtube that demonstrates the zorb ball Magnus effect. They’re beginning to develop into a kind of pop culture phenomenon.

And they’re growing in popularity as more people learn about them through social media and other channels. Additionally, each flexible plastic ball you rent out has the potential to generate large revenues as a product for a rental company.

The popularity of zorb balls may be “the next big thing” in the event rentals sector. Additionally, rental possibilities will increase as zorb ball technology advances over time. What length of time should your event rentals or party rentals firm wait before jumping on the zorb ball bandwagon is a question you might want to consider asking.

Design of this ball

Despite the fact that Akers and van der Sluis are credited with popularising the terms “zorb ball” and “zorbing,” Gilles Ebersolt’s invention predates them by about twenty years. Neither have they substantially changed since then.

On paper, a zorb ball’s design is quite straightforward (though a bit harder to manufacture, of course). In essence, it’s one vinyl or PVC ball enclosed inside another, bigger ball. These balls are linked together by countless tiny nylon strings. After that, an industrial blower is used to inflate the outside ball.

Through a tube that resembles a tunnel, the person enters the inner ball. There are balls with a single entry and others with two. A “donut,” another inflatable that blocks the entry tubes, can be used to block one or both openings.

This ball can be used unplugged on almost any surface, including hills, grass, ice, and snow (just be careful not to get it scuffed up on pavement). The zorb ball becomes airtight and is safe to use in water when plugged with a donut. Some water-zorbing aficionados may add a small amount of water to the ball so that it will splash around, adding to the excitement.

Soon after balls became available, creative uses for them as entertainment began to emerge. Zorb parks, which frequently provide a variety of indoor and outdoor activities for entire families, have popped up all over the world in recent years (including a handful here in the United States).

The most common and possibly easiest inflatable ball game involves getting inside a ball and rolling down a steep hill. That’s all there is to it, indeed. You might also be shocked to learn how tremendously enjoyable going downhill is.

Most specialty parks and “gravity parks” across the world provide some kind of downhill activity. If there isn’t a gravity park close by, you can always utilise a grassy hill with a gradual incline (again, be careful!). The majority of wintertime sledding hills ought should be suitable for zorbing.

These balls are a lot of fun and make excellent party rentals, especially for birthday celebrations that include access to a pool. Zorbing is becoming increasingly popular.

Another well-liked game is about ball wrestling, in which two “combatants” seek to knock each other out of a predetermined region by rolling into each other, sometimes on a track. Similar to sumo wrestling, but with humans as the hamsters instead of animals.

Not only is zorb ball soccer becoming more popular as a game, but some people are beginning to take it seriously as a sport. Zorb soccer, sometimes known as “zorb ball football” globally, entails participants moving soccer balls around the field while sprinting and rolling in their inflated balls, often with their feet inside or outside of the balls.

The Revolution of zorb ball

Just a few years after the word “zorbing” was first used, in 2001, it was added to the Concise Oxford English Dictionary. And that fact attests to the commercial human-filled inflatable ball’s explosive international growth.

Zorbing, however, didn’t truly take off here in North America until much more recently, despite its rapid expansion on a global scale. These balls only became widely known in this area after appearing in numerous internet videos and TV shows. But they undoubtedly were observed.

In several North American marketplaces, human hamster balls are in high demand, and this desire appears to be growing with time. It should therefore not be surprising that many seasoned parties and event rental companies are already making investments in them. They’re not simply entertaining outdoor toys; they’re also successful rental properties.

Kameymall offers zorb balls that have been around long enough for us to be certain they are not only a trend. Despite a few sad incidents involving them over the years, these products have been used extensively enough for us to know that they are generally pretty safe (often due to human error). They are therefore extremely sensible investments for rental businesses, provided, of course, that you reside in a market that welcomes them.